It is the eve of Obama’s first election. Four of Harvard University’s brightest; a surgeon, an actress, a psychologist, and a neuro-psychiatrist, are all interested in different aspects of the brain, particularly how it responds to race. But like all smart people, they are also searching for love, success, and identity in their own lives. Lydia R. Diamond brings these characters together in this sharp, witty play about social and sexual politics.

“…crisp and clever dialogue…Smart People is very funny because it reflects a very sympathetic human foible; the desire to resolve our racial conflicts without messing things up every time we open our mouths.” BROADWAYWORLD.COM, Read More

“Splendid! Diamond…draw[s] laughs even as she firmly pushes back against the notion that we’re living in a ‘post-racial society.'” BOSTON GLOBE, Read More

Join Producing Artistic Director Michael Stevenson, Director Judith Moreland and the cast of SMART PEOPLE in an online discussion Sat. April 24, 2021 on Facebook Live! CapChats expand on your theatre-viewing experience with stimulating conversations with the production’s artists. Questions will be taken from our online audience!

Judith Moreland directed BETWEEN RIVERSIDE AND CRAZY in 2019, and AN OCTOROON at Capital Stage in 2017. She’s also directed at The Road Theatre (North Hollywood), The Blank Theatre (Hollywood) and at the UCLA School of Theater, Film and Television where she teaches acting. As an actor her film and television credits include Aftermath, Dark Skies, Blackish, Grey’s Anatomy, NCIS, Parks and Recreation, and recurring roles on Bosch and Animal Kingdom. She’s worked with many theater companies including the New York Shakespeare Festival, Playwrights Horizons, Ensemble Studio Theater/LA, Shakespeare Center of Los Angeles and was a company member of San Francisco’s American Conservatory Theater for many years.

Rinabeth is happy to return via interweb to Cap Stage after appearing virtually in THE GREAT LEAP and onstage in VIETGONE last season. Offstage, she has kept busy with the world premiere of DISBELIEF (PlayGround), THE HEADLANDS (American Conservatory Theatre), PLAY LIKE A GIRL (Two River Theatre), workshopping several new plays, motion capture on several video games and lending her voice to various commercials and audiobooks. Proud member of AEA, SAG-AFTRA and Ferocious Lotus. www.rinabeth.com

James is a natural born entertainer. Since the age of 4 he knew that by performing he could touch lives and inspire. James has done plays, stand up comedy, improv, and local films all over southern and northern California. James is excited to be apart of this virtual production of SMART PEOPLE!

Jason is a member of the B Street Theatre’s Acting Company. He has performed in over 50 productions there, including THE BIG BANG, THE 39 STEPS, THE NIBROC TRILOGY, WHO’S AFRAID OF VIRGINIA WOOLF, THE LAST MATCH and many more. Favorite regional credits include A LONG DAYS JOURNEY INTO NIGHT (Edmund) and the world premiere of Lanford Wilson’s translation of Henrick Ibsen’s GHOSTS (Oswald) with Arizona Theatre Company, OF MICE AND MEN (Lenny) and THE IMPORTANCE OF BEING EARNEST (Ernest) with Sacramento Theatre Company, THE ELEPHANT MAN (Treves), THE COUNTRY HOUSE (Michael), and AROUND THE WORLD IN 80 DAYS (Phileas Fogg) with TheatreWorks, CAT ON A HOT TIN ROOF (Brick) with St. Louis Rep, Cincinnati Playhouse, and Pheonix Theatre, and LES LIASONS DANGEROUS (Valmont), IDEATION (Brock), and STUPD F#%*ING BIRD at Capital Stage. Mr. Kuykendall also produces, directs, and edits for the camera. Visit NKMedia.biz for his feature film, documentary, commercial work and more.

Tiffanie is a former Capstage apprentice and is very excited to be back performing with this theatre company again. Her most recent roles at Capstage include #11 in THE WOLVES and Grace in AN OCTOROON.

“Smart People” is presented by arrangement with Concord Theatricals on behalf of Samuel French, Inc. www.concordtheatricals.com 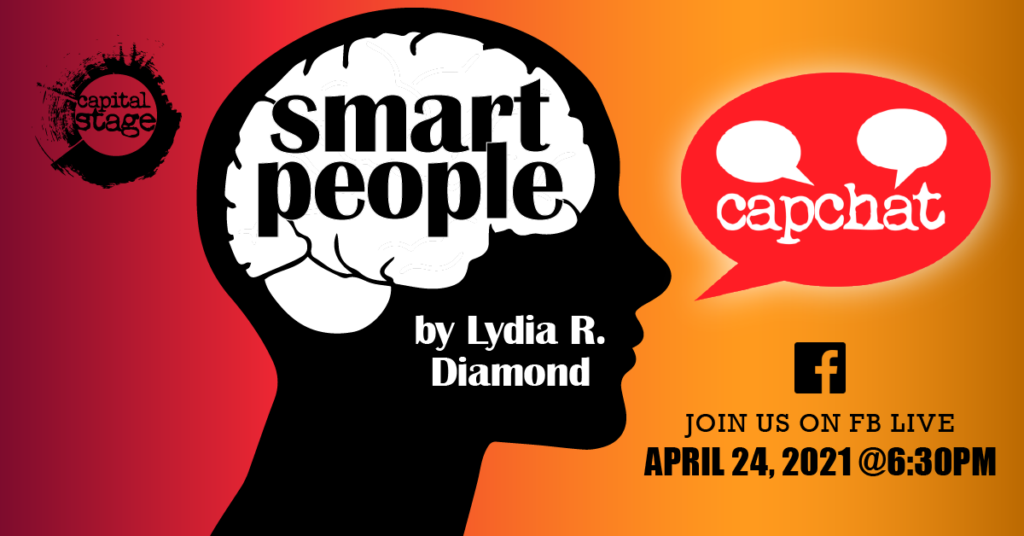