How to Use a Knife

HOW TO USE A KNIFE by Will Snider

In the chaotic hustle and bustle of a Wall Street restaurant kitchen, Chef George is trying to stay sober. In between yelling at a pair of trash-talking line cooks and a pot-smoking busboy, he befriends Steve, an East African immigrant who seems to be a humble yet dignified dishwasher. Set during busy dinner shifts and filled with a cast of unforgettable New York characters, How To Use A Knife bursts with grinding suspense, energy, and surprise. 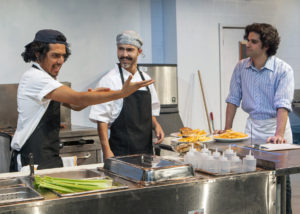 Eduardo A. Esqueda, Willem Long* & Cole Winslow in HOW TO USE A KNIFE | Photo by Charr Crail | *Member Actors’ Equity Association

HOW TO USE A KNIFE is produced as a National New Play Network Rolling World Premiere with the support of Peter Emch by Capital Stage (California), Phoenix Theatre (Indiana), Unicorn Theatre (Missouri), and InterAct Theatre Company (Pennsylvania). For more information please visit www.nnpn.org. How to Use a Knife was developed by the John F. Kennedy Center for the Performing Arts and MCC Theater.