Boomeraging: From LSD to OMG

Comedy Night with Will Durst 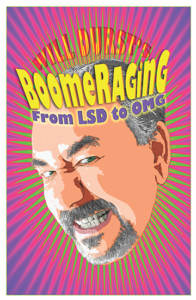 The man the New York Times calls “quite possibly, the best political comedian working in the country today,” Will Durst, proudly takes to the road with his acclaimed show that has been running since 2013 in the Bay Area. “BoomeRaging: From LSD to OMG”, is an uproarious tribute to the joys, achievements, frustrations, and looming doom of the Baby Boom Generation. In this rollicking 85 minute monologue, Durst explains why his chronologically gifted brothers and sisters should continue to refuse to grow old in the face of gravity no matter how many times they forget their password retrieval question. It’s what happens when acid flashbacks meet dementia. A celebration of the maturation of the Boomer Nation: culminating in an extra, added special treat – the Meaning of Life.

Ably assisted by his genially acerbic wit and trusty overhead projector, Durst explores the Boomer revolutions, evolutions and still vibrant role in today’s youth obsessed society (which we invented, for crum’s sake). He shamelessly strokes egos and pats hands, encouraging the Flower Power Generation to persevere through segments entitled The Psychedelic Colonoscopy, Still Doing Drugs, Only Now There’s a Co- Pay & From the Summer of Love to the Winter of Our Incontinence. It’s funny. It’s smart. Clean and uplifting, even. A unique theatrical event delivered with stand- up timing and not less than a modicum of poetry.

Special Note: Due to the use of startlingly archaic technology, children under the age of 40 will not be admitted unless accompanied by a guardian or if they bring a note. We apologize for any inconvenience.

TICKETS: $25 for Subscribers, $30 Regular
Subscribers please call the box office for your discount.

“Durst’s good-natured, acerbic monologue is so funny that… I found myself on the verge of uncontrollable, hysterical laughter. His observations are hilarious.” –SF Examiner

“Acerbic stand-up comic Will Durst’s solo show on aging kills crowd… I can’t remember being more amused by anything in years.” –Berkeley Patch

“Durst’s casual manner and spot-on comedic timing had everyone in the crowd raucously laughing throughout (myself included).” –DC Metro Theatre Arts